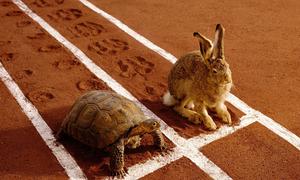 I am always telling my students that we study science to learn more about God’s creation and more about him as the Creator.  It comes so naturally when we study life and earth science.  We see the greatness, creativity, order and care of God all around us.  When it comes to physical science, it is no different.

Newton’s Third Law of Motion says that every action has an equal but opposite reaction.  This is something that many of us can say without even thinking about it, and we see it everywhere.  You push the ball down and it bounces up.  You push water backwards when swimming and you go forward.  The examples could go on and on.

Have you ever stopped to think about how God’s character is shown in this?  While watching the movie Remember the Goal this weekend with my family, I started thinking about Newton’s Third Law of Motion.  In the film, a first year girls’ cross country coach is training her team to win state.  Through the season and at the meets, she has them train with tempo runs (much to the parents dismay).  When asked about her methods she says, “You have to train slow to run fast.”  It seems like for an action (training slow) you get an opposite reaction (running fast).  She explains to the administrator that often you have to do what is opposite.

As it says in James 4:10, “Humble yourselves before the Lord, and he will lift you up.”  This is one of many examples we see where an action has an equal but opposite reaction.  Jesus speaks of it continually throughout the beatitudes.  He shows it through his actions as he served others, despite being the leader and teacher.

We can use Newton’s Third Law of Motion to take a look at how our actions cause reactions around us.  In a world where people think screaming gets you heard, let's try speaking quietly and calmly.  When people think impatience gets things done more quickly, let’s patiently work through things.

I encourage you to take a look around and find examples of Newton’s Third Law in nature and in your interactions with others.