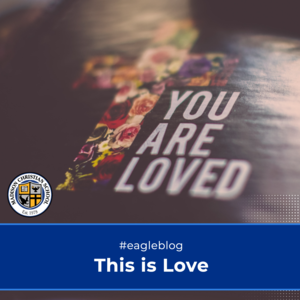 Van Bolin, MCS faculty member, shares a message of love.
This is love: not that we loved God, but that he loved us and sent his Son as an atoning sacrifice for our sins. Dear friends, since God so loved us, we also ought to love one another.
1 John 4:10-11

I held Mary in my arms as she wept bitterly. In her own arms, she cradled a mangled, tortured figure, her body wracked by huge sobs of grief. Her agonized moans filled the somber air, desperate, broken, pleading for the heavens to open up and right this terrible wrong. A rumble and a flicker of lightning in the stygian sky was the only response. All was quiet, all was still; no wind, no birds calling to one another—all of creation was in silent reverence.


All I could do was wearily hold Mary. A trail of tears had dried to my face. My throat ached from my screams that had fallen on deaf ears early this morning. Blood stained my hands from where I had helped take down the body. Not just a body. My Friend. My Teacher. My Master. This Man whom I had loved with all my heart.


At least, I thought I loved Him. I had spent the last three years learning how to love. The blind could see. The deaf could hear. The lame could walk. The captives were set free. I saw it all with my own eyes; I even performed miracles with my own hands. But had it really transformed me? Did I truly love Him to the fullest?


Disgust rose in my throat and bile filled my mouth. Did my love for Him keep my eyes open as He sweat drops of blood? What kind of person leaves his friend to face something like that alone? That guilt should have been enough to make me loyal to the end, but my treachery was not yet fulfilled, for I abandoned Him yet again when He was arrested. Had I not boldly proclaimed my willingness to die for Him just a few hours earlier? How can I claim to love Him one moment and then forsake Him the next? What kind of faithlessness is that?


Overwhelming guilt enveloped me as I lay there, a darkness, heavy and cold, settled over me like the bitter bite of a winter’s night rushing in after the setting of the sun. My chest tightened and a single sob escaped my lips.


A thought snaked its way into my mind, exploiting the cracks in my already fractured psyche. I brushed it away, only for it to keep slithering back.


You are not worthy of His love, it hissed. The idea gripped me with claws of ice. What you have done is unforgivable. He trusted you and you betrayed Him.


I laid my head on top of Mary’s and, unable to control the flood of emotion, my own sobs soon joined hers.


John’s eyes snapped open. Birds chirped merrily in the tree next to him. A gentle breeze tousled his hair. Red-orange clouds drifted lazily above him as they greeted the rising sun. The rays of the early morning light fell on his body, but the chill of night remained. The chill of his dream.


Sitting up quickly, John took some deep breaths and tried to slow his racing heart. A dream. It was a dream. He leaned forward, elbows on his knees, and placed his face in his hands. No, not just a dream, a memory. A memory he had long tried to forget. Despite knowing he was forgiven—the risen Christ left no doubt of that—the scars of regret still remained, his faithlessness still haunted him.


John clenched his eyes and did his best to stifle tears. The shame of that day began to rise in him again. Why was he still feeling this way? Shouldn't he be able to put this behind him? Shame and guilt had no place in his life, so why did he struggle with them? He still felt so unworthy.


Then, in the quiet morning air, in the midst of the turmoil in his soul, John heard the familiar still, small voice. “This is love: not that you love Me, but that I love you and gave Myself for you."


Tears glistened in his eyes as John lifted his head and watched the sun slowly rise above the horizon. Standing and walking to the edge of the roof, he basked in the growing warmth and marveled as the light dispelled the darkness. A deep breath filled his lungs and clarity settled in his soul. He had it all wrong. That day on Golgotha wasn't about his failure, it was about the sacrifice given for him.


The message of the cross is that the Worthy died for the unworthy; the focus is not on the needy, but on Him who is sufficient. God's love is not given based on the merit of anyone's actions, it's given in spite of them. Just as darkness is powerless to hinder the light, so are the failings of the human heart unable to diminish the affection of the Father.


John did not know if the sting of his betrayal would ever completely go away, but this he did know: he would choose to abide in His Father’s love and walk in the light as He is in the light.

"This is love: not that we loved God, but that he loved us and sent his Son as an atoning sacrifice for our sins. Dear friends, since God so loved us [in this incredible way], we also ought to love one another [in that same way]."