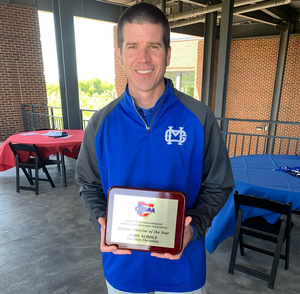 According to the COIAAA website, “The purpose of this award is to give recognition to athletic administrators who exemplify the highest standards of their profession and who, through their influence on the lives of the young people under their direction, have made significant contributions to their school and communities.”

"Andy Scholz is a tremendous asset to the MCS community, as he is a true Christian leader whose wisdom and dedication to MCS transcends athletics," said Jennifer Ladd, Guidance and Intervention Services and High School Cross Country and Track Coach at MCS. "Andy's love for Christ and Madison Christian School is very apparent. He constantly challenges his staff, coaches and athletes to strive to fulfill the MCS Mission Statement to become strong Christian leaders. Andy is a model of Christian servitude, and it is a privilege to coach under his guidance."

Andy also received the honor in the 2015-2016 school year making this the second time he has received the award in his 21-year career of serving as Athletic Director at MCS. The MCS community is thankful to have his continuous leadership and support. Congratulations Andy!