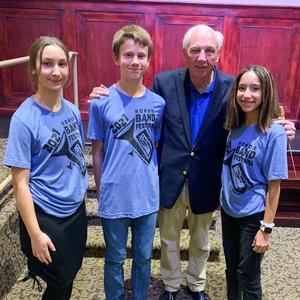 Students were nominated from area schools by their band directors then chosen to participate in the experience. Students enjoyed an enriching day of rehearsals before an afternoon concert performance.

The Honor Band Festival Conductor James Swearingen composed the selections for the concert. He is one of the best-known composers of high school band music in the United States and currently serves as a staff arranger for the Ohio State University Marching Band.