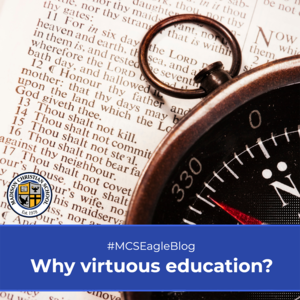 "We have no government armed with power capable of contending with human passions unbridled by morality and religion. Our Constitution was made only for a moral and religious people. It is wholly inadequate to the government of any other." - John Adams

It doesn’t take a connoisseur of news sources or social media to see the multi-faceted tensions that are tearing at the fibers of our country. Although social turmoil, economic instability, and scandalous politics have caused the U.S. to sway, stagger, and stumble before, it appears that there has not been a time in our history with such a barrage of challenges to the very core of our nation’s existence. Over the course of the past couple of years, I have come to accept a possibility: Our country may not be able to live under the Constitution much longer.

This conclusion, however, is not the result of doubt in our republic. It is also not because of a pandemic, or an election, or riots, or racism, or even inflation. Many of these are symptoms of the real culprit. It is because of a void, not in the framework of our republic, but in the hearts of our citizenry: A lack of virtue.

Throughout history, great political philosophers have written about virtue. Excerpts from the following works are studied by our 12th-graders this year because of their influence on the formation of the American system of government, or because of their insight into the beating heart of our republic.

Aristotle produced an entire work on virtue that was the prequel to his book, “Politics.” Coincidence? I think not. In “Politics,” he wrote about the importance of virtue in regards to government. Aristotle believed that “...happiness cannot exist without virtue, and a city is not to be termed happy in regard to a portion of the citizens, but in regard to them all.” Earlier in the work, Aristotle makes it clear that, “...neither individual nor state can do right actions without virtue and wisdom.”

Samuel Rutherford wrote a catechetical argument against tyranny titled “Lex, Rex.” This work would have a noticeable influence on his fellow Englishman, John Locke. In “Lex, Rex,” Rutherford explains that God governs all things; this is Natural Law, which produces Natural Rights. Government is ordained God, and God has given us the rights and abilities to self-govern. He commands us to do so. I do not believe that it is a big step to say that Samuel Rutherford is speaking about living with moral virtue, a true form of self-government.

The debate that was raging for millennia in political philosophy had to deal, not with if citizens should be raised with virtue education, but which system of virtue would ultimately form the best society. Early writings of the Founders, legal documents, and historical-cultural studies of our nation’s formation show the United States did believe that Christian moral virtue was the key governing ingredient of a stable, sustainable, free people.

When the first American government was formed under the Articles of Confederation, they were tasked with preparing for the addition of new states into the Confederation. In their plans to expand, the Northwest Ordinance of 1787, it is written that “Religion, morality, and knowledge, being necessary to good government and the happiness of mankind, schools and the means of education shall forever be encouraged.” This statement precedes a statement about the eternal promise of good faith towards the Indians. It appears that we took both guidelines for expanding our republic very seriously.

In his farewell address on his departure from the Presidency, George Washington warned the nation, "Let us with caution indulge the supposition that morality can be maintained without religion. Whatever may be conceded to the influence of refined education on minds of peculiar structure, reason and experience both forbid us to expect that national morality can prevail in exclusion of religious principle."

American History students are currently reading excerpts from "Democracy in America" by Alexis de Tocqueville. When de Tocqueville toured the U.S. during the 1830s to observe the young American republic, he noted several times in his work the unquestionable influence of religious leaders who "are the partisans of liberty, not only as the source of the noblest virtues, but more especially as the root of all solid advantages; and they sincerely desire to extend its sway, and to impart its blessings to mankind. It is natural that they should hasten to invoke the assistance of religion, for they must know that liberty cannot be established without morality, nor morality without faith…"

He continues on to explain the tandem relationship that exists in a stable civilization between virtue (morality) and liberty. If virtue increases, so also can liberty. But if virtue decreases, so also must liberty, for the people cannot handle living free. According to de Tocqueville, the Americans understood that instructed and instilled morality was the virtue in the hearts of the citizens that allowed liberty to flourish in the United States, unlike the imploding governments of Europe.

Parallel to de Tocqueville, students are also reading works by Frederick Douglass. Frederick Douglass had a firsthand understanding of the effects of a failed tension between virtue and liberty. On the twenty-third anniversary of the Emancipation Proclamation, Douglass delivered a fiery speech, declaring the Emancipation was a fraud. It had not resulted in a real change in the people of the south. De Tocqueville and Douglass both make similar statements to this: Even an act of the federal government cannot change the condition of the people. As De Tocqueville had predicted in the 1830s, rapidly passing acts of emancipation would only enrage and embitter southerners, thus making the conditions for former slaves worse for years to come. Slavery would end, but oppression would begin. Both men understood that real change in the nation can only occur with real change in the hearts of its people.  Douglass declared in his speech, “The life of the nation is secure only while the nation is honest, truthful, and virtuous.”

If we want our republic to survive, we must raise virtuous citizens. The conclusion is clear. Why, then, is virtue not the conversational topic of our day? One side of the political spectrum today calls for the end of the Constitution. The other, calls for the salvation of the Constitution, when “We the People” need salvation first. I have four reasons for this unspoken cancer in our republic:

My hope and prayer is that Madison Christian School will continue to work to be a place that addresses these issues, meeting our students with an accurate, Biblical diagnosis and prayerful, Holy Spirit-filled work to change the prognosis. May the Great Physician continue to speak to us and through us each day to equip our students to live as good citizens of the Kingdom and our grand republic.