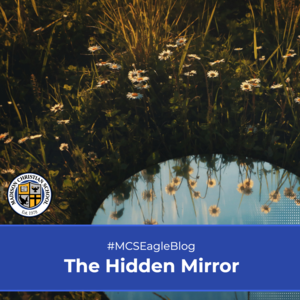 Dr. Tim Houston, Director of Spiritual Development, shares how he discovered a "hidden mirror" and a truth about what children behold.

I will never forget the day that I became a father for the first time. The emotions were abundant and honestly, quite scattered. I was overwhelmed at the idea of parenting and intimidated that soon we would be taking our first-born son home without any help from all the nurses, aides, and doctors who were continually checking on us throughout our hospital stay.

The day arrived to take our son home. The hospital gave us a starter kit for home, and I grabbed the car with the car seat properly inspected and installed (my first victory as a new dad). I met my wife, who was sitting in a wheelchair and escorted by a nurse, at the front doors of the hospital to take our first-born son home.

Six hours later, our first night at home, I understood the sheepish grins and congratulatory remarks from those that lacked the heart to tell us that our blissful parenting bubble was about to burst. Everyone but us knew that sleepless nights and long days awaited us as we adjusted to the new realities of parenting our first child, who decided on an opposite schedule than ours. The truth is, at 8 pounds and 7 ounces, he was dictating our lives as our new parenting journey began. In humility, the Lord showed us that we had no clue what we were doing (except for the car seat) and that he would give us grace and strength and send others to invest their parenting wisdom in our lives.

Our son came to us with nothing but total dependence on us to keep him alive and out of harm’s way. However, within three years, I realized that he brought something home from the hospital with him that I did not initially detect on day one. That little three-year-old had snuck a "mirror" into his diaper bag that consistently began to reflect my personality, attitudes, and actions toward him.

It was a Saturday afternoon, and I was the adult in charge. (My wife has always been a woman of great faith.) She was away for the day, and the kid and I were with the undetected mirror. We were playing with blocks at one point when out of his mouth with great force came the statement, “You stop that!” Internally I laughed because it was cute; externally, I said, “That’s not nice.” Internally, I realized that my three-year-old was a parrot with a mirror. He had just quoted one of my mainstay statements with the same force and attitude as I.

Immediately, I was humbled and fearful that if he was going to continue to do these things in the years ahead, I had better consider my words, actions, and tone in the future. The learning curve was steep, and God had my attention. We were proud of our parrot with the mirror as we told the story to others until one day when a wise man came alongside us and informed us of a very stubborn reality about children: Children become what they behold.

The revelation that I would become the primary formative person in his life was overwhelming. It was then that the Lord began to teach me that I would shape my child’s worldview as a parent. Further, I had to seriously consider the educational model that I would expose him to and be very careful with every model and message we availed him to in his life. Suddenly, each adult, coach, teacher, family member, and every breathing human within one hundred miles of my son became more scrutinized because children become what they behold.

We, like our children, are continually being formed toward or away from Christlikeness in our attitudes and actions based on what we behold. Perhaps the best place to start is our hearts in desiring our children to know and love the Lord. May our children see a faith in us that they want for themselves. Throughout Scripture, a living, active faith is equated with godly actions. Though Scripture clarifies that our works can’t save us, the proof of our faith is in the way we live (John 14:15).

Does my life demonstrate to my child that all I desire is to love the Lord and live for Him? Do my actions and affections align with what I confess to being accurate? Can my children see from my life that Christ is truly worth loving and living for? These are essential questions to consider prayerfully because I am a living testimony that children become what they behold.