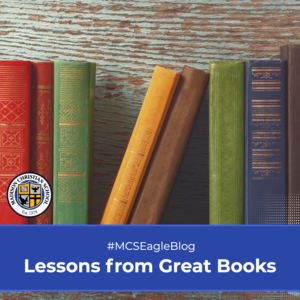 Philip Slonaker, Dean of Students for Grades 7-12, shares lessons learned from books read by the senior students in The Great Books: Modernity class this year.

As a senior-level history course, The Great Books: Modernity introduces students to enduring literary works and ideas from the modern world. Representative texts in poetry, drama, history, and philosophy are read with an eye to worldview analysis, the development of ideas, historical significance, and literary merit. In the process, students contemplate enduring questions that bear on human flourishing, virtue development and Christian living. Students apply logic skills and learn to use rhetoric to craft and participate in discussions surrounding the great ideas of timeless works from the modern period of Western Civilization.

Throughout this year, we have read so many words in numerous Great Books and you all have written and given me many wonderful words through your writing and conversation. I thought it would be most fitting to gift you with words as a reminder of our journey together this year. There are so many lessons from so many books that I pray will stay with you. Here are just a few of the takeaways I hope you will treasure:

In "How Should We Then Live?," Schaeffer showed us that outside of Christianity there are no satisfactory answers to the most basic questions of human existence: origin, meaning, morality, and destiny; We explored the philosophical tension every believer faces–how to be in the world and not of it. And that like a point on a graph, we cannot determine the value of anything apart from the fixed grid of objective truth.

"The Westminster Confession of Faith" clarified the basic tenets of the Christian faith and I pray it can be a useful reference in clarifying the core doctrines of Biblical Christianity.

"A Tale of Two Cities" displayed the ugliness of a nation attempting to uproot its moral foundation–where virtue is replaced by ‘liberty, equality, brotherhood… or death’. Any ideology which attempts to supersede the Cross makes a poor substitute for the Savior and will ultimately devour itself. Sydney Carton illustrated the truth that a man isn’t really fit to live unless he has found something worth dying for.

In "Reflections on the Revolution in France," we came to understand that culture, government, institutions, and even our political rights are less like a game of monopoly and more like a family heirloom–that is things to be understood, valued, and kept in light of eternal principles and not, as progressives assume, as something to be manipulated for our own ends. It also reminded us that time devours everything–so if something has endured through time we ought to retain and improve upon it instead of discarding it.

"Pride and Prejudice" showed us that often times the most significant obstacles in being close to others are the vices in ourselves to which we seem willfully blind. And also that real love is not merely intellectual and pragmatic, nor is it merely passion or feeling, but rather an act of the will that unites head and heart.

"Frankenstein" showed us the futility in attempting to act out of accordance with our nature–that is attempting to play god; and also that just because we have the ability to do something does not at all mean that we should to do it. It also reminded us that often the most loathsome monster we may face is the one who looks back at us in the mirror.

"The Abolition of Man" made clear that education is not neutral–nor should it be. To educate without a complete view of the soul as a harmony of mind, will, and emotions is at the very least teaching a fragmented view of the self and at worst produces creatures who are little better than animals – “men without chests” who are nothing more than slaves to their own appetites.

"The Picture of Dorian Gray" gave us the understanding that beauty, if pursued for its own sake, divorced from truth and goodness, always leads to moral ugliness. Dorian Gray personifies modern man’s obsession with self-indulgence and reminds us that in the end the price of gaining the world is most definitely losing your soul.

"The Guns of August" highlighted the tendency of leaders to be only a reflection of the moral and spiritual level of the people they lead. It also showed us the futility and destructiveness of war as well as the rarity of wisdom and valor in the face of insurmountable odds.

"Bonhoeffer" reminded us that the call of Christ to every man is a call to come and die to self–that there is no crown without a cross. Living as a genuine disciple of Christ will make demands of our lives, but is well worth that cost. Tyrants and the forces of darkness may wage war against us, but the body they may kill, God’s truth abideth still, and His kingdom is forever!

"Brave New World" showed us a future where we are controlled not by fear, as in Orwell’s 1984, but rather by our own obsession with pleasure, stability, and ease. Pleasure is not a sufficient reason to justify one’s existence. It reminded us of man’s intrinsic need to live for something beyond ourselves. The World State is in essence the fulfillment of what Lewis described as “men without chests.” So let us, like John the Savage, “claim our right to be unhappy.”

In "Live Not By Lies," we are warned that whether we live under a totalitarian regime or not, the Christian life is a call to wage war against all that would seek to devour our souls. It also laid out a vision for how the Christian Church can outlast any persecution by anchoring our own souls in truth and then teaching our own children and grandchildren to do the same. We also learned the place of suffering in the Christian Life how it is a means of grace for attaining wisdom and virtue. We were also reminded that the most significant totalitarian regime we may face is ourselves–in our gullibility of believing the same lie spoken in the Garden: “Ye shall be as gods.”

It is with bittersweet tears that I close this letter and send you off into the adventure that the Lord has prepared for you. This letter would not be complete without a reference to Narnia. At the end of "The Lion, the Witch, and the Wardrobe," Aslan, the Great Lion crowns the four Pevensie children and says: “Once a king or queen in Narnia; always a king or queen in Narnia.” While you can say of me that I was once your teacher and therefore always your teacher, I hope you can now consider me something else — your friend.