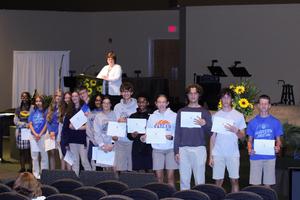 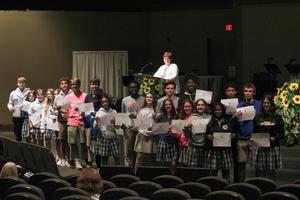 On September 2nd, the Madison Christian High School held an Academic Awards Ceremony to honor students for their academic achievements in the 2021-22 school year. Parents were invited to attend.
MCS's purpose is "to glorify God and to nurture His children by providing a unique educational environment that combines high academic standards with God’s Word of Truth in an atmosphere of love.” MCS is also committed to "educating the whole person spiritually, academically, emotionally, socially, and physically to become strong Christian leaders."
"We want to recognize the many good things happening in our classrooms and honor some of the students who have stood out," explained Principal Kim Miller during the ceremony. "We also want to recognize some of the others ways on our campus where students are pursing excellence."

Students were asked to stand if they were involved in the below activities:

The following awards were presented:

The following awards were presented:

The following awards were presented:
The MCS Community congratulates our students on their achievements!