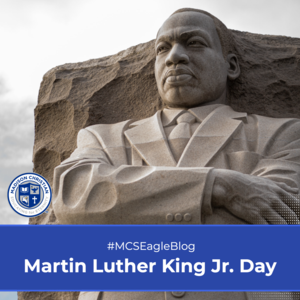 Monday is Martin Luther King, Jr., Day. As we prepare to come together as a community on Tuesday here at Madison Christian School to celebrate the life and legacy of MLK, let us not forget some of his most profound words of wisdom.

In 1963, white moderate pastors called out MLK for causing civil unrest through his acts of civil disobedience. These men were not arguing in favor of segregation, however. The Alabama clergymen declared that MLK’s civil protests were “unwise and untimely,” calling for the citizenry to “observe the principles of law and order and common sense.” The issue the clergy had with MLK was not the goal of ending the era of Jim Crow. The clergy took issue with MLK’s resistance to the immoral laws.

King was ultimately arrested for his peaceful violation of an injunction that temporarily banned public protests. There was nothing immoral about King’s actions; he was committed to a higher moral Law. Written from a dingy jail cell in Birmingham, Alabama, MLK responded to the call from the clergy for his civil disobedience to cease and desist:

“I must make two honest confessions to you, my Christian and Jewish brothers. First, I must confess that over the last few years I have been gravely disappointed with the white moderate. I have almost reached the regrettable conclusion that the Negro's great stumbling block in the stride toward freedom is not the White Citizens Councillor or the Ku Klux Klanner but the white moderate who is more devoted to order than to justice; who prefers a negative peace which is the absence of tension to a positive peace which is the presence of justice; who constantly says, ‘I agree with you in the goal you seek, but I can't agree with your methods of direct action’; who paternalistically feels that he can set the timetable for another man's freedom; who lives by the myth of time; and who constantly advises the Negro to wait until a ‘more convenient season.’ Shallow understanding from people of good will is more frustrating than absolute misunderstanding from people of ill will. Lukewarm acceptance is much more bewildering than outright rejection.”

MLK’s “Letter from Birmingham Jail” is a beautiful work that is both applicable to its own time and applicable to our lives today. This is because his words are Truth. Truth transcends the limits of space and time. Truth may be forgotten, Truth may be neglected, and Truth may be disobeyed. However, Truth is not reliant on our willingness to accept it. Truth is a tough and stubborn thing that remains, no matter what we may or may not do about it. Truth does not end with the passing of a life or the dawn of a new millennium. Truth does not waver from the storms of life, it does not surrender to the revolutions of nations, and it does not fall by the wars of our world. Truth remains.

A true statement in MLK’s letter is the reality that there are many people today who prefer to exist in a world of order rather than in a world of justice. In order to get to a real, positive peace, there will be times that we must live through tension. When injustice occurs, we are called to resistance. To live through injustice without conflict is to live out a false peace. King warns us of valuing a world of “order” where no one is willing to challenge the status quo, no one is willing to question the opinions of authorities, or no one is willing to disobey immoral orders. This is, as he labels it, a “negative peace” of false harmony that glazes over real issues affecting real people.

The resistance of MLK in order to pursue real peace was nothing new to history. King was simply following models of righteous resistance found in Scripture:

Moses was sent to oppose the oppressive reign of Pharaoh (Exodus 8-14).

Shadrach, Meshach, and Abednego refused to bow to an idol (Daniel 3).

Daniel ignored the decree to pray to Nebuchadnezzar (Daniel 6).

We are called by a Savior who shows us that living a false peace was never an option. Truth will, inevitably, lead into conflict. Justice demands action. The actions we take against injustice must not be hasty; they must be prudent. We must respond in the right way, at the right time, and in the right measure. In all cases, though, we must respond.